Normally computer systems need human intervention when certain cases occur.   For example, a message occurs telling that a certain running job is waiting for reply to finish.   Operator then reads the message and check the condition to decide what to reply.   Such effort sometime takes quite awhile.   No guarantee operator is watching console seriously when that message is occurred.   Operator needs some amount of times to interpret and evaluate the message and make a decision what to reply.   Moreover, there is no guarantee the reply is correct nor correctly keyed in.   In the mission-critical situation, a simple mistake could potentially explode into multiple big, serious and expensive problems.

Automate the console to reply correctly and exactly on time is the only solution.   That is ther reason why system-events manager is required.   The given reply should be correct as it has been declared in the database designed and decided by technical supports or system administrator, instead of operators.   The form of the declaration depends on how sophisticated the system-events manager used to automate the console is.   Some are as simple as tables, dan some others are a kind of small program called a “script”.   System-events manager then takes over this ordinary manual effort, so operator could ignore it forever.   System-events manager catches message internally before it’s displayed, even capable to suppress it, and fires appropriate defined action(s) to reply the message without any delay.   No more incorrect reply is possible.

zJOS/Sekar© is one of system-events managers.   It is a solution to establish automated action(s) execution in respond to the occurrences of several types of system events on z/OS operating environment.   System can be a single or multiple networked z/OS hosts. 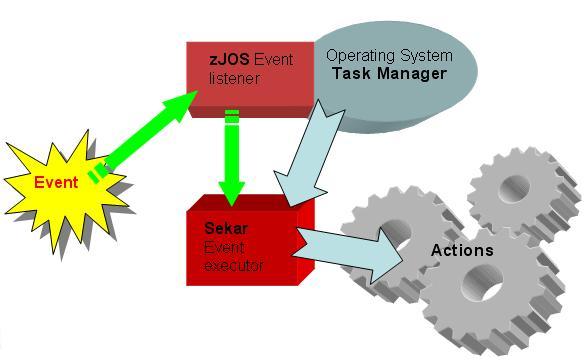 The above figure illustrate how zJOS/Sekar works. It softly cooperates with operating system (z/OS) to immediately responds to every occurrence of any event type and find appropriate users defined action(s) in the database table. All matched entries are then fired.

zJOS/Sekar is designed to give you the ease and even fun of playing console automation.   It gives you the freedom to declare automation rule.   A simple rule is just parameter tabulation.   A more complicated rule can be written as a script in Rexx language.   Some special rexx functions are provided to simplify your rules.   Complex and extensive rules can be developed in a separate program running in separate address-spaces.

Based on the fact that most console automation mechanisms are simple and unconditional, just an event and an action or a series of actions, which can be easily tabulated.   Terms based on clock and calendars are included in this category, because both are provided as filter parameters for tabulation.   So, neither specific skill nor scripting is required to establish system-wide automation.   Scripting or programming is only needed for rules that involve multiple events and/or conditional on certain things.   Clock and calendar are also included when setting in filter parameters is not possible.

Furthermore, in NSI terminology, the term “rule” only refers to rexx scripts.   For the simplest one, we refer to as parameters and for the separate programs we refer to as programs. 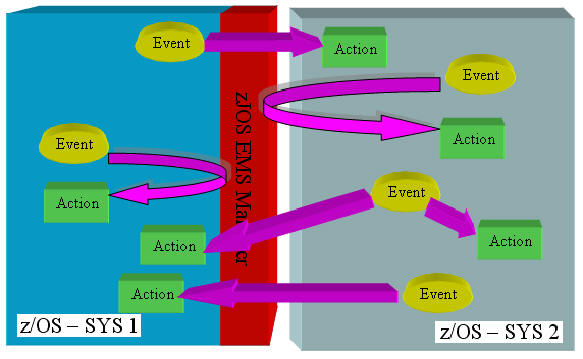 Sekar is an event-driven automation tool for z/OS. It fires users’ defined actions exactly at the time the system event is occurred. On users’ choice, it can even suppress the event while the actions are fired.