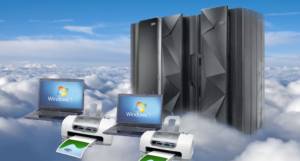 The spool output files of each application is generally only for direct printing in the computer room.   Of course, that’s not all printed.   Instead, only certain reports that are needed to be printed are selected.   Because the same information can actually be seen online.

However, in reality many institutions require almost all of these reports, especially banks.   The reason is commonly about juridical and legality of information.   In fact, sometimes reports have to be reprinted for certain reasons.   So the huge number of spool files must be maintained for a long time.   Of course this is a very expensive task, maintaining them on the mainframe.

XDI/AutoXfer© is a solution to avoid the expense of maintaining the spool output on the mainframe.   XDI/AutoXfer will automatically capture every spool output file that is being generated by a batch job and as soon as it is closed, send it to a number of computers targeted as recipients.   This is performed based on a table that lists what reports will be sent to which computers.

Technically, the delivery is done using FTP, either as a separate batch job, or directly through an API intermediary, on user’s choice.   In FTP session, XDI/AutoXfer acts as a client.   So that the receiving computer does not need any agent from zJOS-XDI, but just an FTP server.   Again, very simple and cheap.

IP address or name
Same spec among recipients in one destination