In mission-critical system environment, back-end servers normally busy with huge amount of batch jobs.   Their schedule is not as simple as cron on Linux or Unix system which is time-based scheduling only.   Each job normally depends on the status of several other jobs and/or non-job events such as messages, file access/release, and/or even date/time and specific business calendar.   All of jobs and their dependencies are described in the operation "run-book".   Before a job is scheduled, operator must be very sure all required conditions have been complied.   Such mechanism usually handled by a team of operators which able to work under high pressure.   They stick their eyes to the console screen and run-book.   Any mistakes in whatever can potentially bring the whole system into very expensive emergency situation.

With the automatic workloads scheduler, operators may ignore their detail work.   The content of run-book are stored into the scheduler database and let scheduler takes over the work.   The way scheduler evaluates all required conditions for each job is by collecting all related information upon occurrence of their appropriate events.   Schedule of a job is actually triggered by the final occurrence of event showing complied condition when all previously collected conditions are complied.

zJOS/Puspa© is one of automatic workloads schedulers.   It's a solution to establish automatic workloads scheduling system on z/OS operating environment.   Workloads can be batch jobs, STCs and/or commands.   Triggers to schedule can be a single or combination of multiple of any type of event, includes end-of-job (EOJ), end-of-job-step (EOS), commands, messages, dataset access, dataset release or date/time.   For multiple triggers, users can freely define boolean type of triggering compliance logic as a list of 1 to 100 ANDs, and each AND can be either individual trigger or unlimited number triggers that's ORed each other.   This means, the schedule is only carried out when all trigger entries in the list have complied, where the compliance of each trigger entry is represented by at least one that has complied.   For example:

Users can also add an exception condition to execute one of provided actions or their own recovery procedure.   Environment can be a single or multiple z/OS hosts.   The above example shows system SYS2 and SYS3 are included in the integrated scheduling system.   All of its main functions are:

When a scheduled job is executed manually, Puspa knows it and ignores all of its status yielded in either each step or final terminations.   Schedule of that job is still ongoing and will be executed normally when all conditions are complied.   In the other word, names of scheduled jobs do not restrict naming of non-scheduled jobs.   Users are allowed to have and execute jobs with the same job names as scheduled jobs.

One of zJOS/Puspa strong point is its triggering method, pipelined at job-step levels with multiple boolean conditional tests to establish complex schedule flows.   See illustration below. 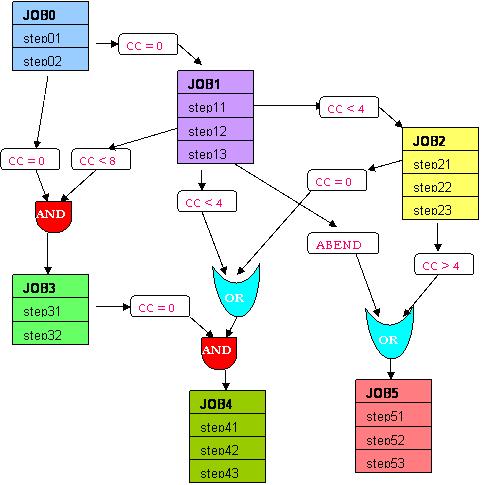 Below is more advanced example of pipelined scheduling flow which involves non job status types of triggers instead of just inter-jobs dependencies.   In this example 2 messages are involved.   It's presented using a series of slides to get better illustration.   But you need to repeatedly click your mouse to have the slides rolling.   It's actually driven automatically in every 2 seconds if accessed directly from Slideshare site.   (thank you very much to Slideshare for providing excellent services). 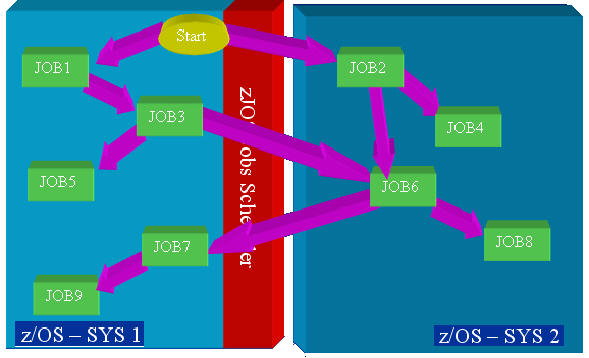