Nusantara Software Industry (NSI), a house of Nusantaran creative and innovative software engineers and developers, is a mainframe software technology leading industry in Nusantara. NSI neither represents someone else nor provides services for someone's else products and technologies. NSI represents itself and sells its own products and technologies that it has created itself.  NSI is very proud being itself.

NSI knows that being itself in the industry level of software business especially "system-level" software is not very easy. It's too hard to bootstrap. It has to spend extra efforts to compete against several mature brands. Not just committing its high quality in products, technology and support, but also in extra low cost.  As a newcomer, price is the main key in fighting the mature brand, no matter how sophisticated the technology is. Because the sophistication of the new technology can be felt after it is installed and run. Meanwhile the mindset of the people had already focused on the brands that had maturely dominated the market. So that pricing at the lowest level is the only way to shock the market, in addition, technology must also prove superior in the next stage. All of this insists NSI to fight extra hard and patient in introducing its products and technology.

Nevertheless, NSI won’t surrender fighting people’s wrong paradigm. Brands and corporate images are nothing to do with the products and supports qualities. NSI keeps trying to provide the best qualities in both products and supports to its existing customers. And thanks God, fortunately zJOS/Sekar© and zJOS/Puspa© has been running on customer’s production systems since 2008 and XDI/AutoXfer© since 2004 with no even a single product error is reported so far.

Business software in the mainframe world is generally very traditional.   Between vendors and customers are bound in a very specific legal contract that is quite complicated.   Vendors must guarantee their products run smoothly, so they must provide support staff who are ready to be contacted or present whenever needed.  There is even a contract model where vendors must provide support personnel who actually oversee their product operations every day at the customer's site.

Frankly, the complexity and the high cost of legal contracts are actually only to build psychological readiness and confidence.   Because, in fact no matter how strict the contract, it can never prevent occurrence of problems when they should occur.  Problem solving actually also runs as its standard.  Vendor assigned personnel who support the customer, regardless dedicated or regular, are still not the ones who will make corrections unless the problem is simply an error setting.  If the problem is software error, it must be recorded and reported to the help-desk. This can be done by the customer himself, or by vendor assigned support person, depending on the contract. But still have to wait until the help-desk gets a solution from level-2 support.

Unlike the complicated and expensive traditional methods, how to subscribe is very simple and inexpensive. There are no specific legal contracts between the vendor and the subscribers.   The legal basis is only the general terms of use issued by the vendor.    Subscription must be initiated by agreeing to these terms.   Next is paying a subscription to get an activation key.   The key is only valid for the next one year from the date of payment. Not renewing the key when it has expired will automatically unsubscribe.

The subscription stages can be carried out as follows.    First is downloading the zJOS-XDI package and installing it on the users' system.   This stage, users are allowed to use all products with trial status.   During this status, the product can only do work 30 times a day.   If this meets the user's needs, then the user is allowed to use it forever.    Certainly not considered a subscriber, and NSI is also not obliged to provide support.   However, if the user needs help, NSI gives the opportunity to communicate via email only.

NSI grew from freelance/outsource team which provided deep system-level technical services leaded by the founder   Some unique services such as exits customizations, local system functions and even creative system-level application developments were his main businesses in the past. Even some modules yielded during his work were contributed as freeware, of course with legally permission from his clients that stated in the contract agreement.

Starting in 2003, the team was then converted to NSI and focus on commercial software industry, mainly in system-level application development. The first 3 products, zJOS/Sekar©, zJOS/Puspa© and XDI/AutoXfer©, are bundled into a single package called zJOS-XDI© and have been marketed since 2004.

Complete story can be found here. 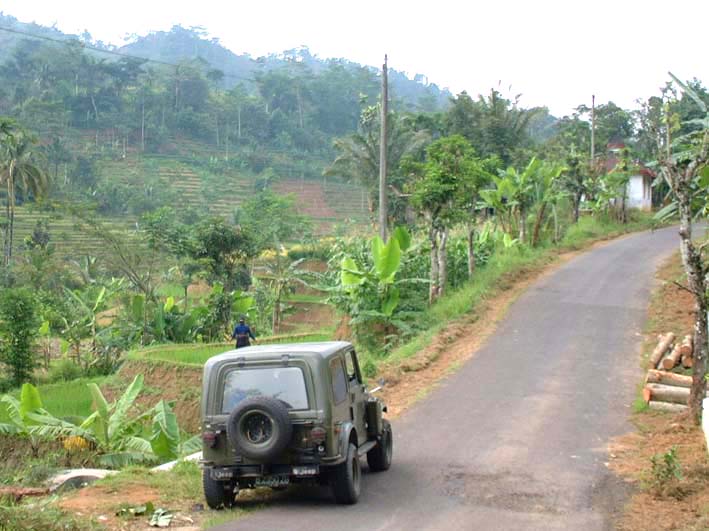 The photo above is a valley of rocks in the Semingkir area, Pemalang. This is where inspiration and thought to build zJOS-XDI first appeared. Understandably, a system programming and systems engineering activist in the mainframe world, trying to deal with the activities of agriculture-based industry. Of course, boredom arose and re-imagined the original world, the mainframe.

Finally, in the midst of busy designing and building distilers for distilling patchouli, it was time to open the laptop and coding, even if only with notepad. Each stage is completed, must visit places that were once served, to try assembling and testing the codes.

Two years later, 2 products in a single framework were ready for testing, and he called Sekar for automation (events manager) and Puspa for scheduler, both are his daughters’ names, and the whole package was then registered as his intellectual property with name XDI2, later is known as zJOS-XDI. Thanks God, he has proven himself not just to finish the project, moreover, yielding the product for mission-critical computing system, which certainly needs very high reliability.   He then called Semingkir as his “Silicon Valley”.